Created by mctkp, AtmosFear is an adventure map set on a mining base on a strange moon, surrounded by evil. Currently the map has two parts, with the second version a sequel to the first.

When something gone terribly wrong on your space travel, you (and your crew if multiplayer) were stranded in a seemingly failing mining camp based on a strange moon in which you need to survive or escape upon. 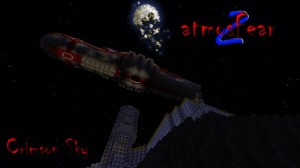 Jumps at the end of the first version. Your player received a weak distress signal that came from a small moon orbiting the planet Ateria. You were then sent to respond to that render of help only to be caught in the middle of something more chaotic.

While it is not recommended to play the version 2 before playing version 1, it can still be done. But to get the full experience, it is recommended to follow the sequel in order.

AtmosFear maps were designed for singleplayer use, but having companion isn’t prohibited as long as they don’t use voice communications as it interferes with the map’s custom sounds.

The map features a built-in resource pack with custom sounds and animated textures so you don’t have to do any re-setting.

To play these maps properly it is recommended to follow these things:

Hold the Windows key and press R to open the Run… dialog, or access it via the start menu.

Type in %appdata% and navigate to .minecraft\saves

Unzip the .zip file from step 1 and place the folder in this directory.

Run the launcher without mods, select single player, and start the game!

Did you manage to solve the core of the problems? Share your experiences by leaving a comment below.