Dwarf Craft, also known as Dwarfs vs. Zombies, is an epic Minecraft minigame created by Robert Moran and adapted by bowser123467.  It is in the style of attack and defense game modes in popular first/third person shooters and is rich in features.

The game is played with two teams: the Dwarves and the Monsters.  There can be any number of players on the Dwarf team, but the game needs at least 30 to start.  Monsters are controlled by AI at first, but as Dwarves perish in battle, they may respawn as Monsters themselves. 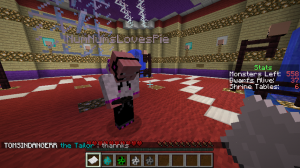 Some Monsters appear more often than others.  Blazes, Skeletons, Zombies, Zombie Pigmen, and Creepers are among the roster for Monsters.

Dwarves are tasked with defending their shrines for the duration of the game: 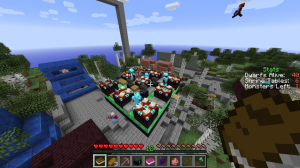 Each Dwarf is assigned a class at the start of the game:

While each class has a specific role, everyone can fight when the time comes.  Each class also has a book that performs a special function.

Since cooperation is the key to winning as a Dwarf, an Ender Chest (known as the Nexus in this mod) is available for easy sharing of items.

The premise of this game is fairly simple, but with a few experienced players in the ring, it can get pretty crazy!

Join the community at Dwarfscraft.com, and join the server (currently 1.7.4) at hub.dwarfscraft.com.  Leave a comment below if you decide to get in on the action, and let us know what you think!