If you are like me, your computer isn’t exactly the greatest machine of all time.  As such, voice chat may not be an option in many games as it slows down your framerate too much to actually enjoy the game.  Thanks to Gliby and his Voice Chat Mod, this is no longer a problem!

With Gliby’s mod, you can voice chat in-game with other players in your world by simply holding the V key.  Provided that your internet connection is decent, your voice will be heard almost instantly by all players in range…

… Which brings me to another point.  This mod utilizes the same logic that mobs in-game do to produce 3D sound!  You may be most familiar with this method thanks to Minecraft’s zombies who groan far off in the distance while you are mining.  As long as you have two or more speakers, you will be able to discern where the voice is coming from in relation to your character.

Some commands and options are available as well, allowing the operator of the server to mute or ban annoying players from using voice chat, as well as providing all users with the ability to customize their audio input.  Options are available by pressing the period key.

Below is a screenshot showing the mod in action: 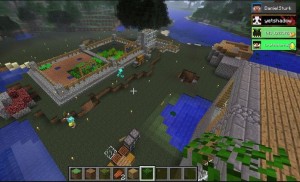 You will notice that players who are speaking are shown in green on the top left, while inactive players are grayed out.

That’s all there is to it!  This mod is simple to use and quick to set up; for anyone who likes to voice chat, it is a great addition to the game.  Even if you use Skype, the features and 3D voice option makes it a far better alternative, especially for servers.

Games and voice chat have a notorious history for providing great laughs and wild adventures.  Do you have any hilarious stories to share?  Leave them in the comments!