Alright – I don’t want to sound like a stereotypical male gamer, but I love explosions.  I play with TNT 50% of the time I am in creative mode, and when I play survival I hunt Creepers every night for gunpowder.  User xXBrozZXx seems to understand the need to watch things blow up, and has created the Grenades mod!

Just as you might expect, grenades function like thrown TNT.  They explode on impact, and there are four types of grenades: 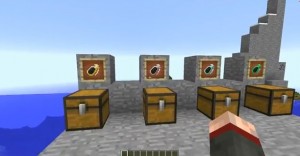 Each grenade is more powerful than the last:

The recipe is rather simple and much cheaper than TNT (for iron grenades, at least):

Iron grenades have a similar blast radius to that of TNT.  The advantage is that they can be thrown in quick succession, do not have a time limit, and can be used at great range: 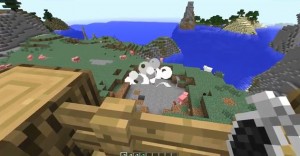 To illustrate the difference in power between grenades, take a look at the emerald grenade in action: 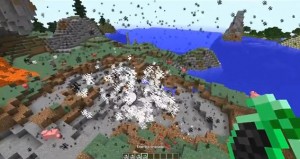 A few interesting notes about these grenades:

Aside from the obvious thought that grenades are awesome, upon discovering this mod a plan immediately began forming in my mind.  Have you ever tried to drop TNT from the sky and have it rain down upon unsuspecting players?  For me, it usually explodes before hitting the ground.

Since these grenades explode on contact it is the perfect solution.  This combined with dispensers and some crafty redstone triggers could produce a wonderful grenade trap – or bomber plane when combined with Metaworlds!

If you would like to see this mod in action, check out ChiefCharcoal’s mod showcase on YouTube:

What other types of grenades would you like to see in this mod?  I would personally love to see damaging variants of these grenades that perhaps do less structural damage and are more intended to take out large groups of enemies.  Leave your ideas in the comments!