We all have our fair share of stories from our noob days in Minecraft.  I, personally, had no idea what a crafting table was for my first eight hours or so of playing the game.  User Crafting_lord1 humbles us with Noob Mod.

The main function of this mod is to introduce Noobs, including Noob Steve – an NPC that builds dirt houses and seems to have no idea what he is doing: 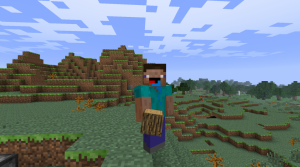 Other Noobs include the Noob Zombie and the Noob Creeper.  Of particular note is that Noobs will frequently parade around the world equipped with nothing but a block of wood.

In addition to the Noob mobs, the Noob Bush is added.  This is a non-biome-specific plant that yields three sticks when it is destroyed.

Finally, popcorn is added as a craftable and consumable food item.  This is no doubt for any non-noob who wishes to sit back and enjoy the show put on by their lesser wood-wielding, dirt-dwelling cousins.  Crafting popcorn is simple: 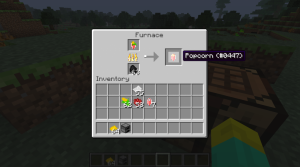 The creator has stated an intention to regularly update this mod with new content and fixes when necessary.  A new food item, called Wood Chunks, should be coming soon – stay tuned for more flashbacks of your noob days!

I’ll be honest – when I first started playing Minecraft, I tried finding bushes to get sticks.  What were some of your most glorious noob moments?  Share them in the comments below!