Beacons have always been an interesting concept to me, but they always seemed to severely lack in convenience.  For example: what good is the mining buff really if you can’t go on epic diamond hunts across the land?  User Kihira presents the world of Minecraft with Player Beacons – a way to reap the benefits of a beacon from anywhere! 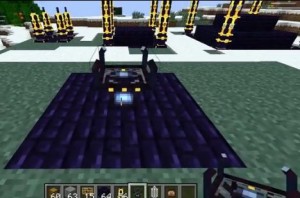 These beacons, once established, will affect the player throughout the entire dimension.  They are similar to normal beacons in that they require shaped platforms.  These beacons offer only four buffs, however: move speed, mining speed, jump height, and resistance.  The only downside is what is called corruption, which will be covered later.

To create a player beacon, you must first create a normal beacon.  Then combine a nether star, the beacon, three blocks of obsidian, two gold ingots and two ender eyes as such:

Instead of emeralds or diamond blocks, Soul Conductors must be placed beneath the beacon:

As the pyramid grows, so do the effects and corruption of the beacon.  Players are designated for each beacon by placing their head on it.  Player heads can be found in two ways: by crafting a sword with the Decapitator enchantment and beheading an entity with the head (the player or a zombie that may randomly spawn), or using The Beheader:

This device does kill the player, so it is ill-advised to use it unless you are fully prepared.  It can also be placed on other players who do not have a helmet equipped.  The beheader will kill its victim in a few seconds, after several visual clues as to what is happening to give the player time to react.

All four buffs are automatically applied at the highest level possible based on pyramid level.  However, they will constantly generate corruption as well.  When corruption gets too high, negative effects will be placed on the player.  To fight corruption, one must craft defiled soul pylons:

One can be placed at each corner.  The mod also adds four gems (which are crafted from a depleted soul crystal); each one of these gems removes one level of their respective buff, but also subtracts from the rate of corruption.  Corruption can be halted or even reversed in this way.

Ultimately, the ideal setup would be to balance a few levels of buffs with a static or extremely slowly increasing level of corruption.  For example, as I mentioned at the start of this post, I would probably use this mod for mining boosts; Haste IV with no other buffs would only slightly increase corruption.  I could easily make it back to town between mining trips to reverse the corruption before anything dire happened.

As a final note: Player Beacons works seamlessly with Thaumcraft, and the developer actually recommends that they be used in conjunction.

This is definitely one of the more balanced mods I’ve encountered for Minecraft.  If anything, I would personally like to see more possibilities for buffs added – perhaps via different blocks used in the pyramid.  Do you have any ideas for this mod?  Leave them in the comments below!