This map is an excellent example of how amazing the Minecraft community can be. History buffs will love the Project 1845 map, which is a work-in-progress map that aims to recreate large portions of ancient and modern China over the centuries.

The map is completely open-source and free to download, which means players can tour around this amazing construction today. The map has a team of creators behind it, but the main creator and lead architect is Bohtauri, who must be a huge fan of China and Chinese history.

Amazingly, the map is built almost entirely in 1:1 scale. That’s right: when you’re walking through the Minecraft version of ancient China, it’s basically the same as walking through the real thing. If you’re planning a trip to China in the near future, you can practice your navigational skills by download this map.

Despite the name of the map – Project 1845 – not all recreations are from that year. Instead, the map contains a number of important Chinese historical features from a wide range of years, including:

-A replica of the entire Forbidden City of Beijing from 1750

-A replica of the Summer Palace from 1911 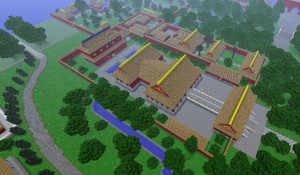 All of these replicas are 1:1 scale. Since the map is in real-life size, only about 5% of it has been completed thus far. Apparently, over 99 million blocks have been added to the map and there are still hundreds of millions of blocks to go. In fact, by the end of the project, the creators estimate that the map will contain 2.1 billion (with a b!) blocks in total. It will also take nearly a decade to completely finish all 420,000 planned buildings.

If you want to check out the map that has broken world records (large urban Minecraft project, 5th largest Minecraft project ever, and others), then download the Project 1845 map today. The creators have designed a special track where players can journey around the entire map in a single trip (it takes 6.2 hours to complete because the map is 256 square kilometers large).

Despite the large size of the map, your computer shouldn’t have any trouble running it. The creators promise that “We have tested it and if your computer can play Minecraft, you can play this map.”

The creators also want to use this map for educational purpose. Because let’s face it: if you were studying Chinese history or architecture in school, how cool would it be to see the ‘real’ thing up close? The creators are porting the map to MinecraftEDU to teach players about the history, language, and geography of ancient China.

Step 2) Drag and drop the map file into the .minecraft/saves folder

Step 3) Start Minecraft, load Project 1845, and prepare to be amazed. The map features a number of additions that make it easy to journey around. Just look for Pink exclamation marks to be teleported somewhere interesting and walk under blue exclamation marks to teleport back to the player hub.