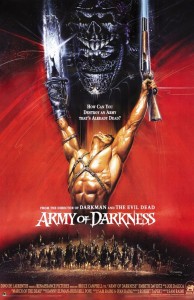 This mod includes content from The Evil Dead, The Evil Dead 2, and Army of Darkness, with plans for more in the future.  It is still in its early stages, but judging from LiamR99’s other work, you can definitely expect greatness to come.

One of the additions is the deadite Henrietta from The Evil Dead 2 in the form of a hostile mob: 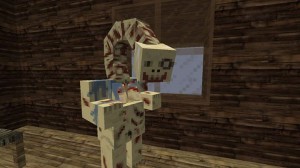 Currently no other deadites are in the game, but more will surely be introduced at a later date.  Henrietta does not spawn naturally yet (an egg is available in the misc tab for creative players) and does not make sound, but will in a future update.

Some content has been added simply as an aesthetic element, such as the iconic laughing deer head from The Evil Dead 2: 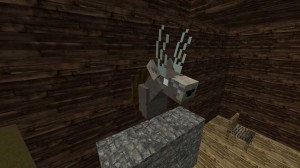 It currently has no function, nor is it animated. Still, a great way to make your cabin a little more creepy.  Some other objects from the series include a cabin clock, some furniture (chairs and tables), and of course an old tape recorder that will play the recording from Professor Knowby as seen in the film.

Finally, the feature most fans are probably looking for: Ash’s chainsaw hand. 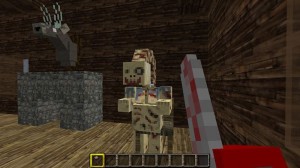 The boomstick will be added at a later date.  It would be awesome if Liam could add some more advanced references, such as spells from the Necronomicon as seen in the video game adaptation of the films (Evil Dead: Fist Full of Boomstick).  I was a huge fan of this game, and would love to see it reincarnated in part.

How to install The Evil Dead mod for Minecraft 1.7.10

Evil Dead tends to be a hit or miss series among viewers, for obvious reasons.  Are you a fan of Evil Dead, do you hate it, or have no opinion on it?  Let me know in the comments below – I may follow this mod as it progresses.