This mod is for all of the Doctor Who fans who play Minecraft – or really, anyone that finds enjoyment in being scared out of their wits.  The Weeping Angels mod, originally created by A_Dizzels and picked up again for updates by The Weeping Team (Country_Gamer, Clayblock, and Torquebolt) adds a new mob to the game that is sure to spice up your mining expeditions. 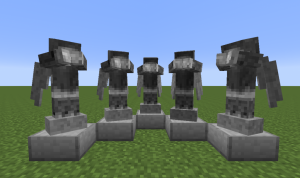 Weeping Angels spawn as hostile mobs in Minecraft, found primarily underground.  Their mechanics are simple in concept: when in the field of vision of any player, they will not move.  If the player looks away, they will chase after the player.  Once they are close enough, they will attack.

An interesting mechanic is that Weeping Angels attempt to extinguish light sources in order to block the player’s vision.  Even if the player is looking in their direction, a Weeping Angel will still approach if it is dark enough. 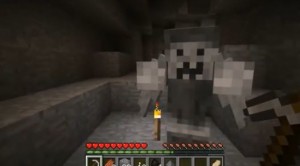 By default Weeping Angels can be damaged by any conventional means, but since they are made out of stone, an option in the config file allows only the usage of a pickaxe to cause damage.  If this feature is turned on, they can only be damaged by iron or better, and in hard difficulty they resist all but the strongest of pickaxes.

Finally, the reward for defeating Weeping Angels is difficult to obtain, but well worth it.  These mobs will drop Chronon Dust, which can be crafted into Chronon Diamonds.  These diamonds are used to create Chronon Metal, which can ultimately be turned into the Vortex Manipulator.  This device allows the player to teleport an unlimited number of times with no resource cost.

How to install Weeping Angels for Minecraft 1.6.4

The original version of this mod was somewhat of a legendary addition to the Minecraft world back in its day.  Do you have any terrifying Weeping Angel stories?  Share them in the comments below!