User Emoniph brings to us a welcome relief in the “magic” mod genre.  This one isn’t about hurling fireballs or swirling storms of ice, but rather the finer art of Witchery.  Despite only being in a pretty early beta, this mod is huge.  Only the basics will be covered here.

Poppets are created in three stages: assembly, imbuing, and linking.  The recipe to create a poppet is simple, making use of some new items in the mod:

Imbuing a poppet with magical properties requires some additional items:

And finally, a Taglock Kit is used to link a poppet to a player or mob:

These kits can be used on player beds as well, giving more chance to surprise other players (positively or negatively) with magic.  Poppets must either be in a player’s inventory or on a Poppet Shelf to have any effect.

Dream Catchers are the simplest mechanic in the mod.  They are created from a combination of an item frame, strings, feathers, potions and diamond vapors:

This Dream Catcher in particular is called the Dream Weaver of Fleet Foot.  Players who sleep near this item will wake up with a speed boost.  The other Dream Catchers are as follows:

It is theoretically possible to mix Fleet Foot, Iron Arm, Fasting and Intensity together to form one super buff for miners. 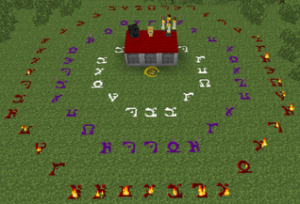 The complexity of the ritual determines how many circles are needed.  The Witchcraft: Circle Magic book is needed to perform any rituals:

This book also instructs players on how to perform each ritual, making it doubly valuable.  Players can also meet friendly Witch NPCs who will aid them in rituals to increase their strength.  Some examples of rituals are:

Curses can also be performed, such as:

Brews are another simple aspect of Witchery.  They are created by using a kettle: 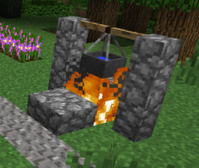 Kettles must be filled with boiling water and several ingredients before the brew can be collected with a glass bottle.  Various items can also be equipped to increase the potency of brews.  Some possible results include:

Finally, this process can either turn players into demi-gods or create unique magical items.  At this time, only four items are available:

There are four player infusions as well:

Each comes with complex powers; as an example, Light allows players to do the following:

The process to infuse a player is best explained on the Witchery wiki, which can be found here.  If you find this mod interesting, be sure to check the other pages as well for more in-depth information!

Every so often a mod of epic proportions makes an appearance in the community.  What other elements of witchcraft do you think would work well with this mod?  Let us know in the comments!