Let us take a moment to appreciate the glory that is Minecraft 1.8.  Without this update, we wouldn’t have fantastic resource packs with new 3D models, such as Wonderfully3D by TheAwesomeKielbasa.  This pack is great because it essentially just updates the models, not the textures – one might call it a Model Pack!

Since no textures are changed, this resource pack can pretty much work with any other texture pack.  It merely provides some dimensionality to the blocks and items in-game.  Some packs may not work properly, of course.  Note that it is still in its early phases, so the number of models are limited. 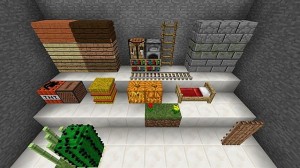 In this screenshot you can clearly see the updated models for a few blocks.  Nothing here strikes me as particularly interesting other than the hay (I don’t believe I’ve seen a pack with 3D hay before).  That is what I like about this pack, though: it is simple, doesn’t really change the Minecraft look, and adds just enough to make the game a little less flat.

Take a look at this crafting table and furnace, for example: 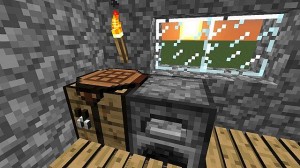 You would miss the differences if you just quickly glanced at it, but upon further inspection you will notice that the crafting table has a slight raised portion on the top, and the furnace actually recedes inward where it should.  Though to be fair the furnace should also possibly have a raised top.

This pack is off to a good start.  As the creator states, it is not meant to be a groundbreaking new resource pack, but rather another option in an already established vein.  I would like to see it differ specifically from Default 3D, and of course be as unique as possible.

What do you think could make this pack stand out from the rest of its kind?  Leave your ideas in the comments!