Here is yet another mod that adds new mobs to the game.  Exciting, right?  Actually, yes – this mod is fantastic and blows most of the other mob mods out of the water!  Prepare to be dazzled by the wonder of pau101’s Fairy mod. 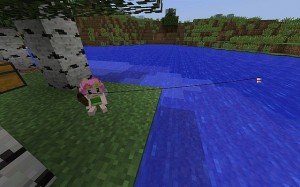 Put simply, this mod introduces Fairies into the game.  Fairies are mobs that possess the following characteristics:

I should mention one more important aspect before continuing which is of the utmost importance: these fairies are adorable.

Great, now with that out of the way, allow me to explain some of the finer points.

First of all, fairies can spawn into different factions – essentially, small groups with a Queen as the leader.  Each faction will interact within itself and attack as a party if provoked.  If the Queen is slain, all fairies in the faction will be adorably sad and start crying.  If all of the lower fairies are slain instead, the Queen will exhibit such behavior.

Fairies perform the same combat duties when hostile and tamed.  The classes available to them are typical RPG classes.

This is the basic class, with no special abilities or behavior.  They are very weak, very timid, and very adorable.

The defender of the bunch, this fairy will be the first to jump into the fray.  They take a third of the damage that other fairies do and are slightly stronger than the base class.

Ever the caring soul, these fairies will restore the health of wounded allies regardless of whether or not they are in battle.  They make terrible fighters, though.

As week as a normal fairy, but always on the lookout for danger.  Adorableness stat is comparable to base class.

The strongest fairy in both health and damage, plus tied for the most resilient with the same damage reduction as the Guard, this little Lady is nothing to sneeze at.

Ah, yes, now for the part you have been waiting for!  Taming a fairy is actually quite simple.  They first must be separated from their faction by means of ruthless slaughter (I know, it’s depressing).  After about a minute of sulking, they will decide that they never liked their chatty sisters anyway and be completely fine.

Once this happens, hold any of the following items and right click on them to feed them:

* may not work on the first try.

** only used for Queens, who cannot be tamed with any other food.

As it turns out, fairies really love food.  After accepting your gift the selected fairy will become your companion.  She will follow you around, and can be customized with shears (for hair) or blank paper (for a name).

Aside from being adorable, these fairies are surprisingly very functional.

Right clicking any fairy will compel her to grab onto your head and take flight.  Sounds weird, but hey – you get to fly!  Only for a short time, however, because Steve is fat and these fairies are tiny.

Right clicking while sneaking will motion the fairy to take a seat.  Having a fairy sit is a good way to organize your fairies, leave some home without making posts (read further for this), or have a tea party.

Fairies will also teleport to the player if they fall behind when not posted somewhere as long as the player is holding an Ender Eye or Ender Pearl.  This has some obvious useful applications, and may even result in finding a lost fairy some day.

This is one of the most interesting mechanics in the mod.  By placing a sign post and typing the name of any named fairy in it (or multiple fairies), it will become available for posting.  To post a fairy, simply stand next to it and wait for the red @ signs to turn green.

Once posted, fairies will not leave the vicinity of the sign.  They will move at most 6 blocks away, or 12 if the sign has the text “    ~f” somewhere on it.

Posted fairies can be assigned tasks with an interesting and infinitely useful mechanic.  Simply place a chest near the post (no higher than one block up or further than six blocks away) and place items in it to determine their behavior.  Multiple chests can be used, allowing for mixing of zones.

Phew!  That is the Fairy mod in all its glory.  It seems interesting in concept, but its awesomeness cannot be truly appreciated without experiencing it first hand.  Here are just a few uses for these fairies off the top of my head:

While the mod is definitely great, there are a few things I would like to see added to make it even better.  Namely:

I could think of many more, but these are key ones which I think would greatly benefit the mod.  Nonetheless, this is one of the better mods, and certainly so when mob mods are concerned.  I award it ten out of ten fairy wands.

What features would you like to see added, or what interesting uses have you thought up for features already in place?  Leave your answers in the comments below!